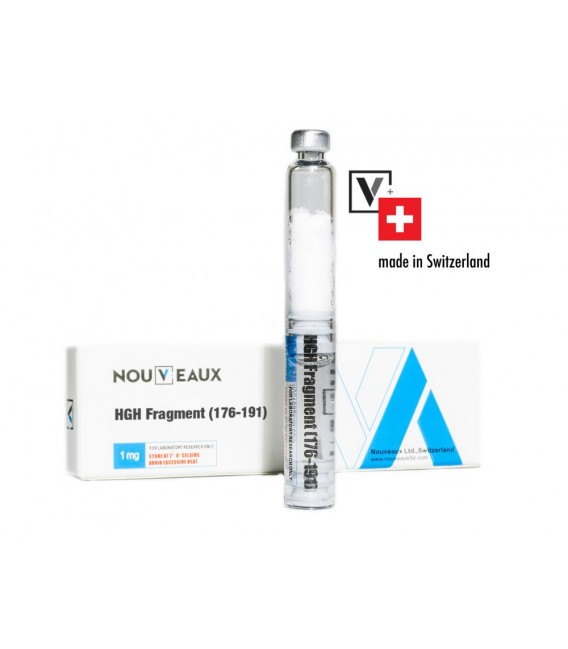 HGH Fragment (176-191) Nouveaux. Growth Hormone (GH). This peptide, as the name implies, is a piece of the 191 amino chain that makes up growth hormone

The HGH Fragment is a modified form of amino acids 176-191 of the human Growth Hormone (GH) polypeptide. This peptide, as the name implies, is a piece of the 191 amino chain that makes up growth hormone, from positions 176 through 191 to be exact. This fragment has been shown to induce lipolysis, or fat breakdown, and even inhibits lipogenesis, which is the transformation of food materials into fat stored in the body. Research studies have shown that these happens both to humans and to animals. This short amino-acid chain that make up Fragment 176 is only about 100% of the length of the entire strand of growth hormone and seems to have no other typical positive or negative effects that growth hormone does such as actual growth of tissues or insulin resistance. HGH Fragment (176-191) is a sterile, non-pyrogenic, white lyophilized powder intended for subcutaneous or intramuscular injection, after reconstitution with sterile Water for Injection (0,3% m-Cresol).

Investigators and scientists at several studies and researches discovered that the fat-reducing effects of GH appear to be controlled by a small region near one end of the GH molecule. This region consists of amino acids 176-191, and is less than 10% of the total size of the GH molecule and appears to have no effect on growth or insulin resistance.

It works by mimicking the way natural GH regulates fat metabolism but without the adverse effects on blood sugar or growth that is seen with unmodified GH. More specifically, GH cannot be used as an anti-obesity treatment due to adverse effects:

These segments of the synthetic peptides HGH Fragment (176-191) have been investigated for their in vivo effects in laboratory mice musculus. Research results have shown that HGH Frag (176-191) nave resulted to a short-period increase in blood glucose and amore sustained increase in plasma insulin, together with other fragments such as 172-191, 177-191 and 178-191. In addition, the researchers have suggested that functionality of the peptide depends not only in the informational sequence but should also have the correct physical configuration. Also, this fragment, being a region of high accessibility to proteases and also rich in praline, have been demonstrated to affect the conformational change in the cytoplasmic domain of the band 3 of erythrocyte membrane protein by serving as the hinge for the pivoting of the two subdomains. This then suggest that such residue is significant in conformational changes be serving as sites for peripheral protein binding in some body cells.

In another study on animal subjects, they found out that a 500mcg dosage of the said hormone increased the lipolytic activity in adipose tissues without having neg alive influence in the blood glucose level. Futhermore, though it behaves like a human growth hormone (HGH), it does not causes hyperglycemia because it does not compete with HGH receptors. Because of such effects, researchers have suggested that it might be used for the elimination of excess abdominal fat which is < significant aspect of HIV-associated lipodystrophy.

Other studies claimed that protein peptide HGH fragment (176-191) actually acts or the reduction of excessive adipose tissues (body fat) such as those in the abdominal area and increases muscle mass while enhancing the lipid content of the body. In laboratory tests on fat cells from humans, HGH fragment released fat specifically from obese fat cells but not from lean ones, reduced new fat accumulation in all fat cells and enchanced the burning of fat. HGH fragment reduces body fat in obese subjects and enhanced fat burning without changing food consumption or inducing growth (as it dies not increase IGF levels) or any other unwanted GH effect.

So as a conclusion, HGH fragment:

Since only the active fragment of HGH is used, there havenâ t been observed any of the adverse reactions connected with that hormone.

This product can be used not more than 3 years from the production date (see box).

After reconstitution, may be stored for a maximum of 14 days in a refrigerator at 2°C – 8°C.

Store vials in an upright position.

Store in a refrigerator (2°C – 8°C). Keep in the outer carton in order to protect from light.

For one month can be stored at room temperature. 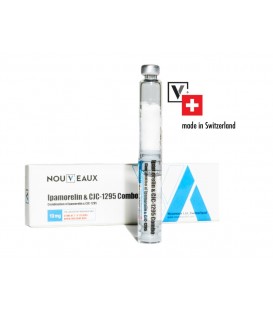